I own an old early 2011 MacBook Pro, I'm considering to buy a new laptop but the new MacBook Pro doesn't meet "pro" requirements, is too expensive for what it provides, comes with a useless touch bar and is not upgradable.

My current MacBook Pro has been upgraded during the years (without requiring to go to an Apple Store):

So I keep upgrading it and now, with the sunny weather coming back, I tried to work outside but quickly realised that the battery runtime has reduced drastically during the last few months. Unlike the new MacBook Pro, I can change the battery on the 2011 one. But the question is where to buy a new battery. Either go to Apple to change the battery for 140 € (and I'm not even sure they do it for a 6 year old computer) or buy online one the multiple compatible batteries.

The problem with the compatible batteries: only Chinese companies are selling them and there is no way to find out which kind of cells they really use. Last time I bought a compatible battery for my previous MacBook, it died after a few months. At that time there was not too many "fake reviews" but nowadays it's even more difficult to find a quality product as we can't trust the reviews on online stores.

The other thing with bad quality batteries, they tend to burn and explode. That's not a good thing 😉.

I ended up with a Floureon battery compatible with Apple A1322 battery:

There was cheaper ones, but it was the one with the fewer bad reviews and the one providing the more details about the battery specifications. According to their specs I'm expecting almost 3 hours runtime while working and longer with lighter load.

First thing I noticed is that the seal was not sealed but already broken. Otherwise in the box we find the battery in an antistatic bag, surrounded by foam and the 2 screwdrivers necessary to replace the battery. One is a regular Phillips screwdriver but the other one is a less common 3 wing screwdriver for the screws holding the battery. 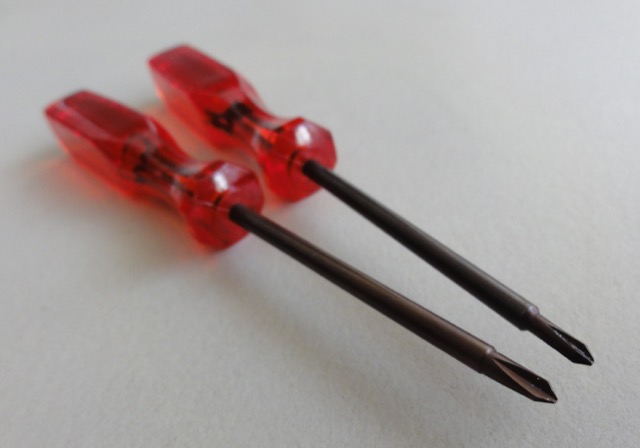 I did also reset the SMC to be sure the battery is properly handled.

Right on reboot the battery was already holding 77 % charge and I let it fully charge. 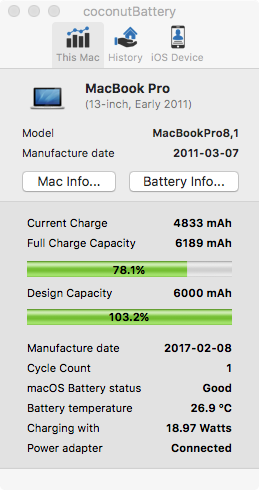 I did a first test with something similar to my regular work load (bear in mind that it's not a constant load): 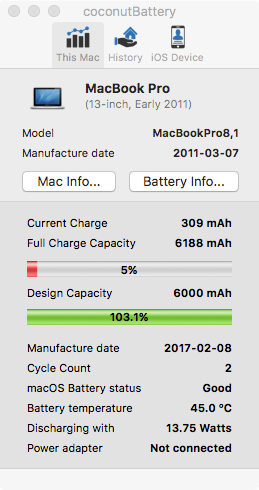 That first round was quite similar to what was expected.

P.S.: This post will be updated in a few months to tell how the battery ages.

I have been using this new battery for almost a year and the good news is that it's still working! The replacement battery in my older MacBook died after 3 months. I'm not very nomad so the battery indicator says it's been through 7 complete cycles.

Coconut stills report the battery as 100 % design capacity. Looks like this battery was a good choice.

Comments Add one by sending me an email.